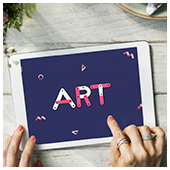 In many years, Windows users have been stuck with the same old Paint software, wondering whether improvements would ever be made. The day for change and innovation has finally come, and Microsoft has recently announced a new version called Microsoft Paint 3D. If you regularly rely on Microsoft Paint for basic graphics and image work, learn more about Microsoft Paint 3D and it’s benefits below.

With the new Microsoft Paint 3D, users will have the opportunity to create both 2D and 3D graphics and images. It is just as easy as it always was to use pen and paintbrush features to draw a 2D image, but now these images can be converted into 3D. There is also a stamp feature that allows a user to add stickers to their 2D creations to make them 3D.

Additionally, just like in the world outside of the computer, the 3D objects in Microsoft Paint 3D can be written on with pencils, pens, or paintbrushes, adding 2D imagery to 3D creations. One of the additional benefits of Microsoft Paint 3D is that the creations that users make on the app can easily be shared on social media. This makes it easier than ever before to put Microsoft Paint creations to use.

With Microsoft Paint 3D, users are also able to take images from their smart phone and transform them to 3D images in Microsoft Paint 3D. Even further, if you have a 3D printer, you can actually bring the 3D creations from your app to life.

All these new innovations make Microsoft Paint 3D an exciting development in the Microsoft product offerings. This new version of Microsoft Paint will be made available with the latest updated version of Windows 10 Creator's Studio and should be released early in 2017. If you are ready to get started with this program or want more information about what else the Microsoft Creator’s update has in store for you, contact us as soon as possible.